James Brown Live at the Apollo and the Cuban Missile Crisis 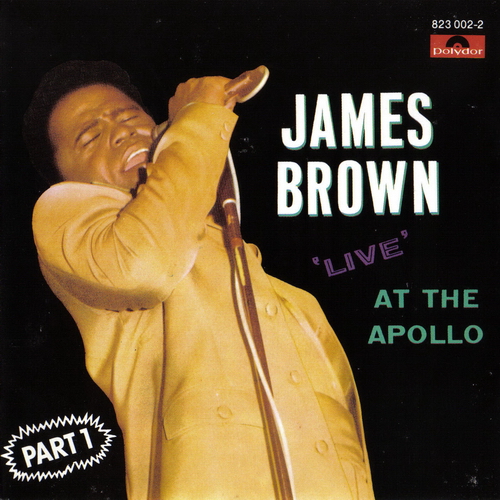 In late October of 1962 it really looked like the world was going to change, and not for the better. The cold war was definitely getting hotter and the Soviet Union and the United States were dangerously close to button pushing time. In the middle of all this superpower huffing and puffing a young R&B recording artist was trying to start Act II of the rest of his life. The fates weren’t going to let a little thing like the Cuban Missile Crisis get in his way.

James Brown was 29 years old and reasonably successful in the music business. His singles had sold well and he was considered one of the top four or five performers under contract with King Records. But that was not enough for the ambitious Brown. He wanted to become a pop superstar and believed he understood how to make that happen.

His strongest musical attribute was his live performances where his charged personality could connect with an audience and explode. For years he and his backup singers, The Famous Flames, had played to predominately black audiences in what was known as the “chitlin” circuit. These concerts, called revues, would include an amateur dance contest, a male and female singer, a comedy act and end with Brown’s vocal fireworks and his gravity defying dancing.  When he approached his boss at King Records, Syd Nathan, with the idea of making a live recording he was turned down.  Nathan didn’t believe a recording of a live concert would yield any three minute long singles, which were the backbone of the record business in those days. Undaunted, Brown took $6,000 of his own money, rented the Apollo Theater in Harlem and hired an on location recording crew to capture a new kind of pop record: James Brown, Live at the Apollo.

New York City was cold on that October 24th night, suiting the mood of most New Yorkers who believed their city stood a good chance of being nuked before the end of the week. Earlier that day newspaper headlines had proclaimed the start of the US naval blockade of Cuba, threatening to fire on any Russian ship that didn’t comply with the embargo. In Moscow the state run radio station had been broadcasting, every half hour, a dire warning, claiming that the U.S. threats would “unleash nuclear war”. All week people had been stockpiling groceries and bottled water and even TV sets. It seemed nobody wanted to miss watching the end of the world.

Tickets for the James Brown concert sold for $2.00 each and the line stretched around the corner guaranteeing a sold out crowd in spite of world events. In an attempt to get the audience in a better frame of mind, Brown had members of his road crew bring hot coffee to the waiting people. He had all of the Apollo ushers dressed in rented tuxedos so that they looked as sharp as he did. During the day’s afternoon performance people who were especially vocal were asked to remain for the late show and moved closer to the front of the stage. Brown wanted to be able to count on these people to add to the excitement of the record.

It can be helpful when you listen to Live at the Apollo to think of your sound system as a kind of time machine and the clarity of your <insert brand name here> system as a window letting you “see” what happened on that night.  The performance begins with the famous phrase, “Are you ready for star time?” delivered by Lucas Gonder who besides being the emcee is the band’s organist. Following the introduction and listing of Brown’s hits the band kicks off with a rousing number and James Brown takes the stage. Throughout the entire concert listen to how the band is almost letter perfect in the way it supports Brown’s wild exuberant interplay with the screaming audience.

Nowhere is this excitement more evidenced than tracks six and seven of the 2004 re-released CD on the Polydor label. Your audio system will place the muted trumpets firmly to the left of the stage with the tenor and baritone saxophones flowing to the right. The drums seem to be slightly elevated in the center and the sounds produced by the organ and guitar seems to float from the right side of the stage. The Famous Flames are left of center and Brown is firmly planted in the center. If you listen carefully to the apparent distance between his voice and the microphone you’ll get a sense of how he manipulated the ebb and flow of the building emotional connection with the audience. Sometimes he’s purring into the mic pulling it close and vocally stretching syllables like a color smeared across a canvass. Other times his voice almost fades to inaudibility letting you see him bending down touching outstretched hands from people standing in front of the stage. The audience participation now becomes an equal partner to the singer with single voices call out from the surging crowd extolling Brown to “go on and sing the song!”  If Brown is the backwoods preacher then they are the willing converts allowing him to lead them beyond this loveless world.

It is the tremendous dynamic range capability of your Gramophone system that allows you to accurately retrieve this seminal musical event. The best audio systems can simultaneously produce the loudest transients without masking the subtlest inner details. Without their ability to portray this wildly changing scene with all of its dynamics intact you wouldn’t be able to hear exactly how it was recorded.

All of this raw emotion with its give and take between performer and audience registered with the record buying public. The album remained on Billboard’s best selling album list for 66 weeks and has been included in the Library of Congress’ National Recording Registry. Rolling Stone magazine has listed it as number 24 in its list of 500 greatest albums. Now you can revisit that tumultuous time in the world’s history and find how one person’s indomitable spirit triumphed and created lasting art.