I've been living a lie. My name is Paul. There. I've said it. It's something I try to keep close to the vest, but I am one of those cursed people that goes by their middle name. I never really had a choice in the matter. It was my parent's decision and one that I have had to live with and be tormented by my entire life. It always pained me on the first day of class when the teacher would call out "Paul Rowe."

"Yes. That's me, but please call me Tom, for no particular reason."

What does this have to do with the movie, Paul? Absolutely nothing. I just saw this as an opportunity to unburden myself of this deep, dark secret. 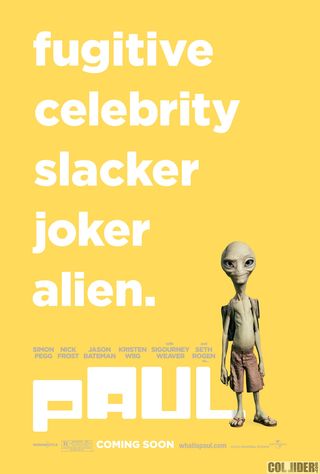 Anyway... Paul. The latest from the lampoon from the team-up of Simon Pegg and Nick Frost. They've covered the undead and action adventures. This time around they are twisting the alien invasion genre around on itself.

Graeme (Pegg) and Clive (Frost) are sci-fi geeks. Having taken the pilgrimage to Comic-Con in San Diego, they set off on a tour of the United States' western theater of alien landing sites, the Black Box, Area 51, Rosewell, etc. Cruising through the desert in their sweet RV, they discover Paul.

You'd think two sci-fi fanatics would be well equipped to deal with an alien encounter, but they aren't.

Paul, voiced by Seth Rogen, looks like your typical, gray-skinned, big headed, big eyed, alien. It's an image we know well and for good reason. Paul tells the pair that the government has leaked his image through popular culture to ensure that should they ever run into him or anyone from his planet, they won't completely lose their minds.

Paul enlists Graeme and Clive to help him escape the government facility that has been holding him since the 1940s, at first as a guest and later a prisoner. Having sent a distress call to his home planet, he must get to the rendezvous site.

The trio--later a quartet when joined by God-fearing Ruth Buggs (Kristen Wigg)--are chased by Zoil (Jason Bateman), a Men in Black/FBI/CIA type, that is puppeteered by "the Big Guy." Think Dr. Claw from Inspector Gadget as played by Sigourney Weaver.

Paul brings the Pegg and Frost duo back to something much closer to Shawn of the Dead, or even their BBC sitcom Spaced (BOOM! That's geek street cred.) It's calm and charming. The comedy demeanor is sweet and comfortable.

While Paul, the one with an American accent (hm), is brash and rude, there is still some affection there. It's pleasant. Where some comedies out there today, Hangover, Due Date, Step Brothers, anything from the Apatow crew, can be a bit of an assault on the funny bone, Paul, much like their other movies, is more of a caressing.

And in similar fashion, the jokes lead up to some sincere feeling. Sure the characters are funny, odd, and goofy, but they are still human, even Paul. I don't think Paul reaches the emotional heights of Shawn of the Dead when Shawn's mother turns into a zombie and he must put her down. That was some tense stuff. Paul skirts that and doesn't linger too long before returning to a calm, steady funny.

Beyond that calm and steady, Paul is sprinkled with comedic juggernauts Jeffrey Tambor, Jane Lynch, David Koechner, Joe Lo Truglio and Bill Hader. Each one is a delicious morsel while on screen, giving a nice balance Pegg and Frost's easy going. And of course there's Seth Rogen being Seth Rogen. I actually like him better as Paul. I liked not seeing him on screen. Not that I'm Rogen hater, but I'm just a little sick of him. His usual outlandishness is toned down while he's the voice of the alien. While there is plenty of crudity, it's not as over the top. It fits the space of Paul quite nicely. After all, Paul is from a highly evolved race. He knows a great deal more about the universe. But sure, no matter how evolved you are, a fart joke is still pretty funny. 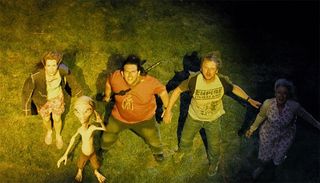 For my geeks out there, Paul offers plenty of inside jokes for you to devour. It's littered with references and nods toward all manner of science fiction and pop culture. Sometimes I found myself laughing alone at some of the references. A few surprised me. "Really, no one got that that was from Aliens? Come on!" Others, caused me to shrink down a bit because they were embarrassingly geeky.

Paul's a fun movie. Do you need to rush out to the theater to see it? I don't think so. There's nothing there that won't play just fine on your TV at home. In fact, it might work better. I have the feeling that Paul is one of those movies that I will like better at home. It's something that I can have on in the background and pay attention to and enjoy in those moments when I lift my head up from my computer. Or glance back for a break from some sort of cleaning or household task.

If you're a fan of Pegg and Frost, you're going to see it in the theater. Otherwise, I think you can wait for it to come home.